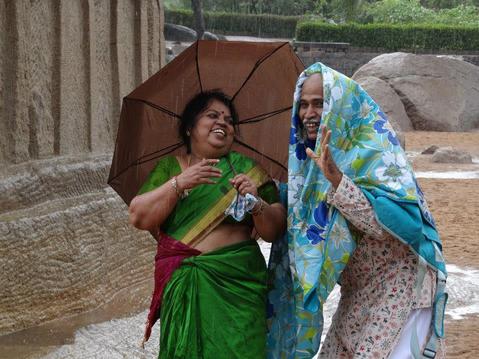 When people come together during a disaster, they also bring out the richest and most powerfully positive human emotions.
Grit, determination, endurance, resilience, altruism and great courage. Heroic acts that each and every individual does in their own small and big ways! Here is a reservoir of the indomitable human spirit to inspire us, give us hope and a sense of trust in all that is good and possible in each of us. ​If you would like to share a story of hope from your experience in the Tamilnadu floods or any other disaster that you have lived through, write to us at fooniferse[at]gmail.com and we will post it here. ​


"While my sister and I panicked on the second day of the floods concerned about our parents who were stuck in Ashok Nagar, one of the key areas that was affected in the Chennai floods, a friend's brother in law travelled several kilometers, the last five on foot, to find them and inform us of their safety. Subsequently another friend's father visited them to give them food and water on the day the floods started clearing. And a young man we do not know visited them and sent us a photo of them to reassure us that they were safe. My friends registered their name in different organizations that were supporting people to reassure that their loved ones were safe. These acts of courage and altruism are incredible to experience first hand in our lives. We wonder if we would have had the same courage ourselves. We are overwhelmed and moved by this generosity of human spirit. When we finally touched base with our parents we realized that they had not only been resourceful enough to take care of themselves, but also fed and clothed fifteen other stranded people. Proud, humbled and deeply touched! "  - Srivi and Sandhiya

"The Army braved severe conditions to rescue stranded people on difficult terrain. In Ramapuram on Thursday, an Army column led by Major Rakesh Khatkar from the Madras Engineer Group worked for hours to save over 50 differently abled children from a school for the aurally challenged. Some of the men, who had little knowledge about the terrain, swam in waters that reached the second storey and brought the children down on their shoulders. A woman, who was eight-months pregnant, was brought down from the terrace, using a chair to avoid any injury. In the last three days, this single column has saved close to 700 persons using three boats."

Kannamma, whose house in the Ezhil Nagar slum is under waist-deep water, is back at work. She has been a permanent employee of the city corporation for the last eight years and is entitled to all the leaves that other government servants get. “Nobody has told me how many leaves I can take. I don’t understand these things because I am not educated. I have come to work because I don’t want my salary cut,” she says.
Here is another well known fact: all of Chennai’s and indeed all of Tamil Nadu’s sanitation workers are either Dalits or Adivasis. Most of them are from the Arundhadiyar Scheduled Caste.
“Everybody in Chennai has suffered equally because of the floods. But only my people will go through the extra suffering of cleaning Chennai’s rotting s**t. Why can’t the concerned citizens and celebrities who are distributing food and blankets also clean up the city? Why is the media only projecting them as heroes?” asks Ravichandran Bathran, a postdoctoral fellow at the Indian Institute of Advanced Study who is also from the Arundhadiyar community.
http://www.hindustantimes.com/analysis/flooded-chennai-s-dirty-secret-dalits-clean-rotting-mess/story-nyqoydzM32dnCoR9C1wZQI.html

When I returned after jumping five walls again, my dad said that he had seen our neighbour carry something like a chulha into his flat. Chulha?! In this age? I was quite literally surprised. He had in fact also seen him carry some pieces of wood. I chuckled despite the whole situation. Chulha and wood, my dad must be dreaming. As I readied the leftover upma to be served as lunch for my daughter, I smelt the unmistakable odour of burning wood and smoke. I looked at my dad. He was right! In a matter of an hour, our enterprising neighbours had brought us rice and sambhar. - Sudeepa Nair https://sudeepanair.wordpress.com/2015/12/19/when-the-waters-rose/